Anglicans were among the early British settlers in our area, but our history begins in 1826. We received a charter from the Diocese of Pittsburgh and began building a brick church on this site. Funds ran out and the building was leased to a Cumberland Presbyterian group, still left unfinished, the building was dismantled.

In 1866 a large new church was constructed as the result of the growth of the congregation and a booming economy based on the oil and gas industries.

In 1898 the adjoining parish hall was completed.

On February 24, 1900, men working on the organ left a candle burning in the bellows room when they went to lunch. The bellows caught fire and the fire quickly spread, demolishing all but the bell tower and the lower exterior walls of the church proper.

On the Sunday of the Resurrection 1901 the first Mass in the new church building was held. Construction was completed in the early summer at a cost of $39,000.

On the Feast of St. John the Evangelist, (December 27, 1904) the mortgage was burned and St. John’s was consecrated.

We have a food pantry distribution day once a month which requires committed volunteers. We also have one time opportunities throughout the year. Each year we make arrangements with Mission groups who stay with us and work with some of our community partners in Franklin.

Community Food Pantry with food distribution held the fourth Saturday of each month from 9:30 until 11:00 a.m. 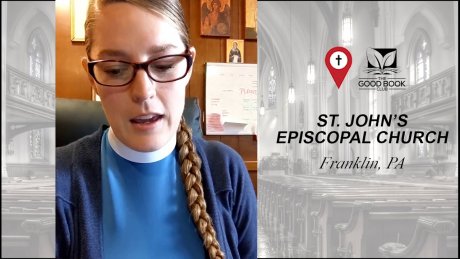 3 Now there was a Pharisee named Nicodemus, a leader of the Jews. 2 He came to Jesus by night and said to him, “Rabbi, we know that you are a teacher who has come from God; for no one can do these signs that you do apart from the presence of God.” 3 Jesus an

Looks out of date?